U3A study groups hold that education can be lifelong and should continue in the years of retirement—‘the third age’. From their origin in France, U3A groups have spread to many countries. Currently there are about 3500 groups on five continents. They are all voluntary, self-managed organisations, looking to their own members to provide presentations, but also drawing upon experts in the community. They thrive in New Zealand. There are fourteen in Christchurch city.  A list of them is on this page.

Some groups offer their courses as a lecture series on member-proposed topics. Others form a number of continuing discussion-groups (on Comparative Religion, or Music say) wherein the members of each group all research and present on the group’s chosen subject. Both models are admirable. For more information and background on U3A see some New South Wales resources here.

Okeover follows the first model – a series of lectures. 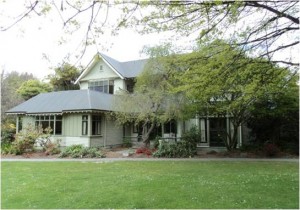 For many years the group met in the Continuing Education Centre of the University of Canterbury, a heritage homestead building called Okeover. In 2010, violent earthquakes rendered many Canterbury University building spaces inaccessible. The university had to use every available space and the group had to move to St. Stephen’s Church, Yaldhurst.